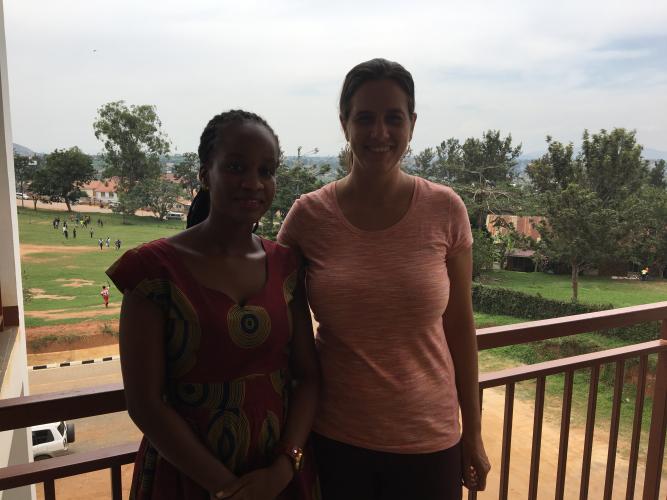 Since Sarah Sanderson, an English Language Fellow in Mbarara, arrived in Uganda, she has offered several workshops on exchange opportunities abroad and how to craft successful applications for international programs. After these workshops, she began working individually with several students who were particularly motivated to apply for upcoming scholarships offered by the U.S. Embassy in Kampala. Today, Sanderson received the news that one of her mentees, Esther, has been awarded a fully-funded scholarship from the U.S. Embassy to spend five weeks in the United States for women’s leadership training. “Thank you so much once again for your guidance towards my application for the SUSI program,” Esther wrote Sanderson on hearing the news. “I am so blessed to have you as my mentor.”
This high-achieving student is a junior at Mbarara University of Science and Technology majoring in gender studies and women’s health. This will be her first time not only traveling to the United States but also traveling outside of Uganda. How did she do it? During weekly one-on-one sessions with Sanderson, Esther learned tips and strategies for writing a compelling personal statement, how to ask for letters of recommendation, and proper formats for a résumé and a CV. This student is one of only four women in Uganda selected for this opportunity, and she will spend five weeks this summer participating in the 2018 Study of the United States Institutes (SUSI) for Student Leaders on Women’s Leadership. SUSI for Student Leaders are intensive short-term academic programs, the purpose of which is to provide groups of undergraduate student leaders with a deeper understanding of the United States while simultaneously enhancing their leadership skills. The program will examine the history and participation of women in public life in the U.S. and focus on two major areas: developing participants’ critical thinking, communication, decision-making, and managerial abilities and placing these abilities in the context of the history and participation of women in the U.S. politics, economics, culture, and society.
Winning the award was not only hugely significant for Esther but also, as a Fellow and mentor, for Sanderson. Fellows have the rare, valuable, and unique opportunity of constantly being in the field, which gives them the chance to observe young leaders and potential scholarship candidates in action. Most Fellows know the transformational power of participating in an exchange program, and being a part of an individual’s journey and development can be extremely impactful. This one student’s award has also re-energized and re-inspired interested university students, along with Sanderson, about the potential rewards of researching and applying for opportunities abroad together. Sanderson will keep in contact with Esther to learn how the exchange experience progresses, and moreover Sanderson will host her for future speaking engagements about her time in the U.S. and the advice she’ll bring back for others hoping to apply to similar programs.
Esther has not left for the U.S. yet, but the plaudits from the community have already starting coming in. “Dear Sarah, Thank you so much for supporting Esther and Deborah’s application process.” one local professor wrote in an email. “I am so happy and excited for both of them. Esther has been a hard working girl since first year and I think she deserves the win.” Sanderson will now return to the process of ensuring Deborah—and dozens more young people in Uganda—seize their own chances.