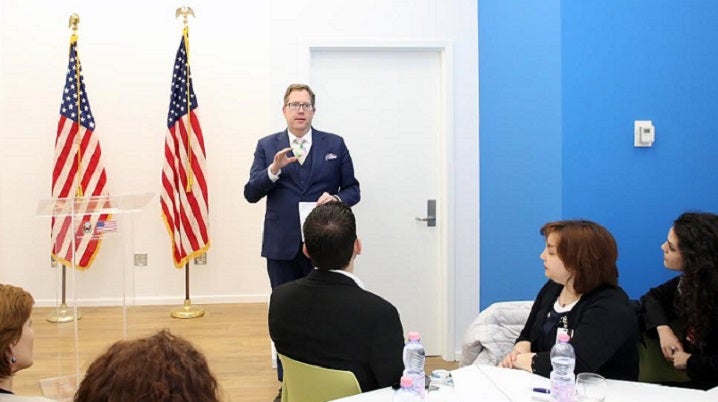 Nine Albanian journalists working in print and television met at the U.S. Embassy in Tirana to take part in a mock press conference with Public Affairs Officer Ryan Roberts. The event came after a twelve-week English for Journalists course led by English Language Fellow Harry Leeds and Professor Brunilda Kondi of the University of Tirana. During the session, the journalists posed questions about regional politics and U.S.-Albanian relations using the style and speaking techniques they had learned about during the course.

“The classes were great. Besides having the opportunity to write news stories in English, it was really useful to learn the technical terms,” said Vladimir Karaj, Vice Editor-in-Chief at the influential newspaper MAPO. The course took place at the American Corner in Tirana, making use of the print and electronic resources available there. The participants plan to write for English language media in the future and attend press conferences conducted in English.