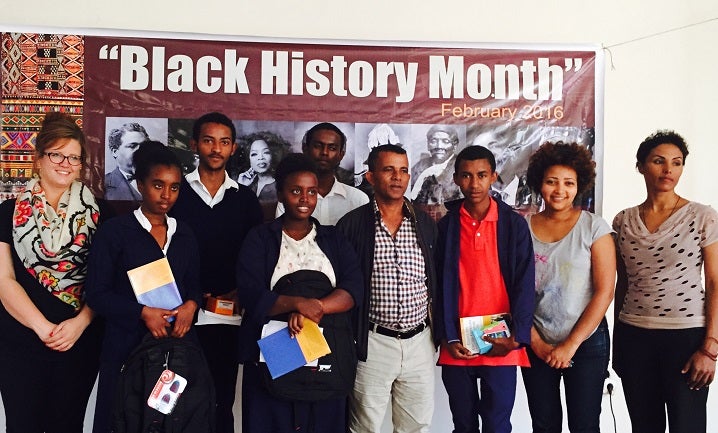 Each February, the U.S. Embassy in Addis Ababa travels around Ethiopia to the country’s three American Corners to host a Black History Month Essay Writing Contest. Materials are sent to the American Corner sites ahead of time so local high school students can read about different topics ahead of time. This year’s reading were centered around locations significant to the Civil Rights Movement, including the home of Ida B. Wells, the Buffalo Soldiers Memorial, Ebenezer Baptist Church and the Abyssinia Baptist Church.

English Language Fellow Hannah Murphy visited the American Corners along with Ea staff member from the U.S. Embassy’s Public Affairs Office to host the contest. The pair gave a workshop on the basics of essay writing and Murphy discussed organization of an essay before giving the students the essay question.

For the essay, students were asked to compare a place they read about that is significant to the American Civil Rights movement with  a place of importance in Ethiopia. Those who submitted essays are students at both private and public schools throughout the city. There was one overall winner, a second and third place winner from both public and private schools.

The winning essay spoke of comparisons of “Soldiers of Greatness,” where the student discussed the similarities between the Buffalo Soldiers Memorial and the Statue of Servants in Adwa, where the defeat of the Italian army took place, as well as comparing the Abyssinian Baptist Church to the Arwa Amba Community, where the 400 people living there believe the best escape route from poverty and hunger is education and hard work. One student described the essay writing contest as a chance to “dig in more and discover a lot.”