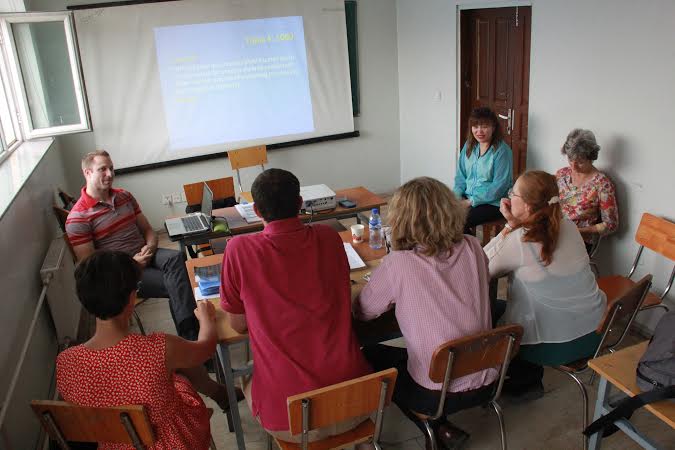 Dave was a Fellow at Hanzhou Normal University from 2010-2012 and at Beijing Normal University from 2012-2014. Along with the help of his colleagues, Dave designed, monitored, managed, evaluated, and implemented pre- and in-service teacher training programs and other English language programs within mainland China and throughout the East Asian & Pacific (EAP) region.

One of his favorite projects as a Fellow was creating and implementing the Beijing-American Writing Center (BAWC) at the U.S. Embassy in the capital city. The BAWC offers tutoring and professional development opportunities for Chinese professors and students to help improve their English language and writing skills.

The impact of the BAWC is far-reaching; it has served more than 1,000 people from areas throughout China, both in-person and online. Dave and the BAWC also helped counsel and assist U.S. officials in developing effective English language programs and services to meet the U.S. diplomacy mission in China. The opportunity to create and implement the BAWC is just one example of the sustainable and meaningful work Fellows perform in countries all around the world.

Beyond his professional growth, Dave also learned the nuances of cultural sensitivity and negotiating different cultural norms. Living and working in China helped Dave gain important cultural knowledge and inter-cultural communication skills that have proven invaluable in his professional and personal life. “Over the course of my time in China I became very close friends with many Chinese people. I became a different person living abroad and saying goodbye to my life [in China] was emotionally overwhelming” because of the deep connections he made there. Dave was able to overcome this culture shock by connecting with a supportive community of Fellow alumni. Dave is currently working toward a Ph. D in applied linguistics at Georgia State University. He has used his experiences as a Fellow, like creating and implementing the BAWC, in his research pursuing this degree. “Being a part of a professional organization that is highly respected, and in turn, having my ideas being respected, made me fall in love with the program.”