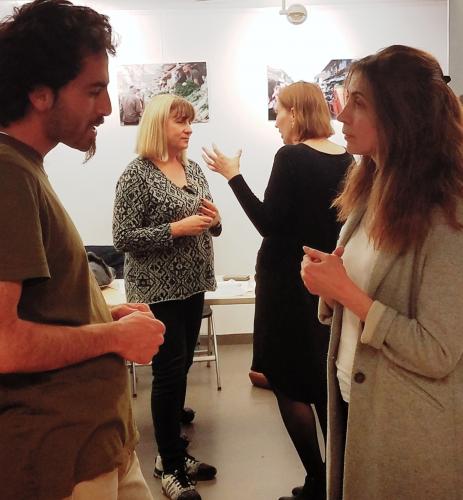 Under the guidance of English Language Fellow Megan Selway, students in an advanced English class at the American Center Jerusalem were recently introduced to the norms of American small talk. They read an article explaining that one needs to be positive in order to seem friendly and then analyzed how small talk is conducted in Israel comparison—which led to a class-wide discussion. Selway led the group through typical topics in American small talk, and the class brainstormed some of their own anecdotes, hobbies, and personal interests that they could share. For the last twenty minutes of class, the students practiced small talk in a simulated party atmosphere: they talked to a conversation partner until they heard the DJ change the song; then they had to pick a new partner. This activity was highly successful, though it led to an interesting request from one eager participant: “Can we have a real party next time to practice what we learned?” she asked.
Selway chose this activity because these are individuals who are keenly interested in American culture and language, and some of them are considering studying in the U.S. Because language and culture are intertwined, sometimes it is very nice to step back from the form of the language and examine how English fills this all-important social function in the American culture. After all, we don’t really know our own culture until we travel abroad and try to explain it to others.