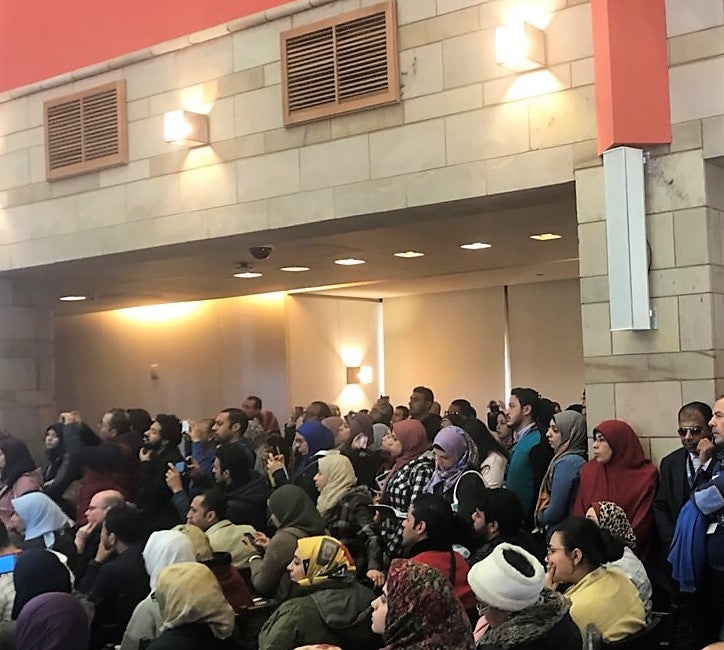 Dr. Adrienne Johnson, Assistant Professor in the Department of Education at Missouri Western State University, completed a two-part English Language Specialist project in Egypt focused on teacher training and facilitating mentoring skills for teachers of young language learners. The first part of the project was comprised of a series of presentations at NileTESOL in Cairo and the second was a week-long workshop for teachers from across Egypt.

At NileTESOL, conference attendees squeezed into an auditorium to listen to Johnson’s plenary, “Growth Zone: Exploring the Benefits of Leaving your ‘Comfort Zone.’” Johnson reported on the event saying, “the plenary talk was the first one I have ever given, and thus the topic was very appropriate to my own situation!” The packed room showed Johnson that teachers were both in need and appreciative of training opportunities such as those offered through NileTESOL. In addition to the plenary, Johnson facilitated workshops on student needs in the 21st century and creating interactive classrooms for young learners.

In an effort to encourage local teachers to pursue development opportunities independently and take initiative to build their skills, Johnson delivered a week of mentor workshops with twenty English teachers and supervisors from communities around Egypt. Johnson approached the concept of mentoring from a support perspective. She trained participants to empower their mentees to learn and grow independently and modeled best practices for interactive learning. By the end of the week, mentors taught short lessons and participated in mentoring conversations with peers.

Johnson noted, “In order to grow this independence, teachers need two things, support and confidence.” As an experienced mentor, mentee, and mediator, Johnson explained that teachers need to know that if they try new strategies, and the strategies don’t work the first time around, that they will not be punished. She also emphasized the importance of having someone who is available to facilitate reflection and to build confidence in existing skills and problem-solving strategies. “Helping supervisors to switch from a punitive or consulting role into a mentoring or coaching role helps to build the supportive environment needed to promote such independence,” Johnson noted. Through NileTESOL presentations and workshops with mentors in training, Johnson continued her work in building a global community of teachers supporting teachers.

“The mentors I worked with were passionate and admirable teachers,” Johnson shared. “I was amazed at the stories of what they were doing despite large class sizes and some of the challenges they were facing.” Years prior to teaching at Missouri Western State University, Johnson worked as an English teacher in rural South Korea, where she experienced similar challenges with large class sizes and limited resources. “What was inspiring was the teachers’ tenacity in overcoming those challenges and maintaining a positive attitude in terms of their ability to support their students,” Johnson explained. Throughout her workshops, Johnson witnessed the passion each teacher had for quality teaching and for supporting both students and colleagues. “The biggest impact this assignment has had on me is simply reinvigorating my passion for supporting teachers and students from all backgrounds,” Johnson remarked. And she is taking this inspiration back to her classes at Missouri Western.

Bringing her own career full circle, Johnson had the opportunity to visit a former mentor while in Egypt. As they toured Luxor together, the “connections to the community through his role as a teacher were impossible to miss,” Johnson stated. Parents of former students came up to thank him, and he showed his continuing concern for the generations of students and teachers he was supporting. Johnson noted that “the entire experience was a strong reminder of the difference an educator can make on an entire community.” She aspires to leave a similar impact through her teacher training in communities around the world.

Adrienne Johnson is an Assistant Professor in the Department of Education at Missouri Western State University, preparing both pre-service and in-service teachers to teach English language learners.  She earned her Ph.D. in Linguistics (Second Language Acquisition) from the University of Kansas after teaching K-12 English learners in rural and inner-city public schools in South Korea, Chicago, and Michigan, as well as working as a district literacy coach.  She has taught in EFL, ESL, bilingual, sheltered, and dual language environments and is always learning. As an active member of the regional MIDTESOL board and state professional development groups, she works to advocate for English learners and their teachers, while using her training in mediation to promote supportive collaborations and learning environments.