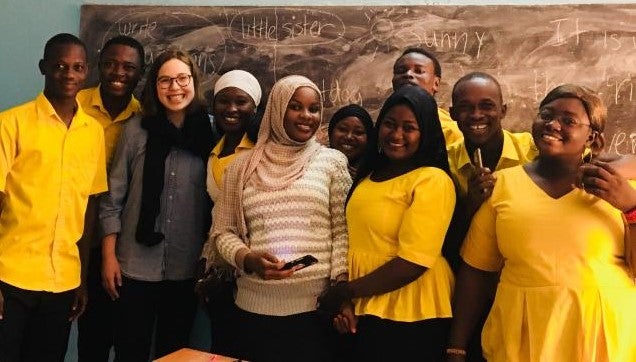 International students learning English nearly always treasure the chance to talk to native speakers. Future journalists also treasure opportunities to practice their interview skills. English Language Fellow Reilly Knop recently brought both those chances to life for her journalism and information science students at Institute for Information and Communication Technologies Training (IFTIC) University in Niamey, Niger, by introducing them to a special guest speaker: Knop’s little sister, who was visiting Niger and Africa for the first time. Students asked questions about American and local cultural similarities and differences, first impressions of Niger, and education in the United States—and even snuck in a few questions about love and dating from a North American perspective! Most students were shocked that Knop and her sister were the only two children in their family. In Niger, where the average number of children per family is around seven, a family with two children seemed particularly small. After the informal group interview, the group continued the conversation with a taboo-style circumlocution activity and then finished off the class with some American songs for fun.

The Journalism and Information Science students at IFTIC are beginner English-language learners. The majority of these students are from Niger, but some also come from Chad and a few are from Benin and Burkina Faso. The students are used to speaking many different languages at home and while they are out and about, but they are beginners with the English language. So far in the semester, it has been a real challenge for students to participate even in short conversations in English. They worked hard to prepare questions to ask their guest and succeeded in carrying on a group conversation, as well as exchanging important information about Niger and the United States. Now, every week when Knop sees her students, they ask how her sister is doing. The interview was a simple activity of cultural exchange, but it had a lasting impact on all the participants—students, Fellow, and visitor.