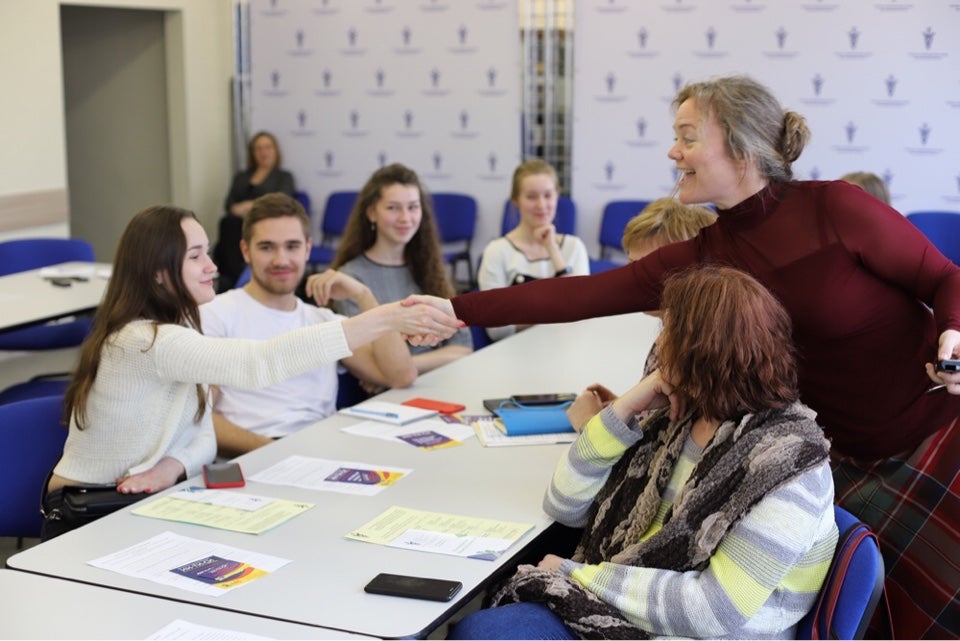 When Johanna Campbell arrived as an English Language Fellow in Russia (2018-2020), she was stepping into the unfamiliar, but she quickly learned having a deep appreciation of the arts, along with enthusiasm for language acquisition, would go a long way in making personal connections. During her two-year fellowship, Campbell collaborated with faculty as a visiting lecturer in Moscow before shifting to the Institute of Technology, Mechanics and Optics (ITMO) in Saint Petersburg. Each week, she spent several days teaching at her host university, while also preparing to lead and facilitate conference presentations, teacher training workshops, and master classes. Although based in the northern capital, her professional duties brought her to regional centers as far away as Kamchatka. It was on these distant journeys that she was often asked, “Why are you in Russia?” And to this she would simply reply, “Because I was invited.” Arriving with an open mind and heart allowed Campbell to form lasting connections, making a positive impact on the people and communities she visited. Campbell fondly recalls one of these invitations, working with English Access Scholarship Program students in Nizhny Novgorod, a region that sits between Moscow and Kazan, the capital of the Republic of Tatarstan. Never one to show up bereft of ideas, she brought with her a love of the fine arts. After meeting the organizers, she convinced them to include the local art museum in the itinerary. Down each curated hall, she toured the galleries together with her new students practicing English through the language of color and perspective. Joining in on the fun, a pair of security guards were able to briefly let down their guard and practice basic English vocabulary with the group before returning to their posts. After the ceremonies, Campbell gave a plenary address before leading teacher training workshops, hosted by American Bashkir Inter-College. She then met with university students for a dialogue on student engagement techniques. Although she was invited to share her expertise, she believes that she was “the lucky one,” stating, “I learned so much from my colleagues and am grateful to have worked with them and their students.” The finale of the whirlwind program in Ufa was having the chance to go backstage and meet the lead dancers and choreographer of the classic Russian ballet Swan Lake.

Johanna Campbell is an English language teacher, trainer, and curriculum developer with extensive field experience across the U.S. and overseas.

Campbell has traveled, lived, and taught in the central and southern United States, across Western Europe, in the Gulf region, and Russia. She holds an MA in Applied English Linguistics from the University of Houston and a BA in Politics and Government with a Spanish minor.