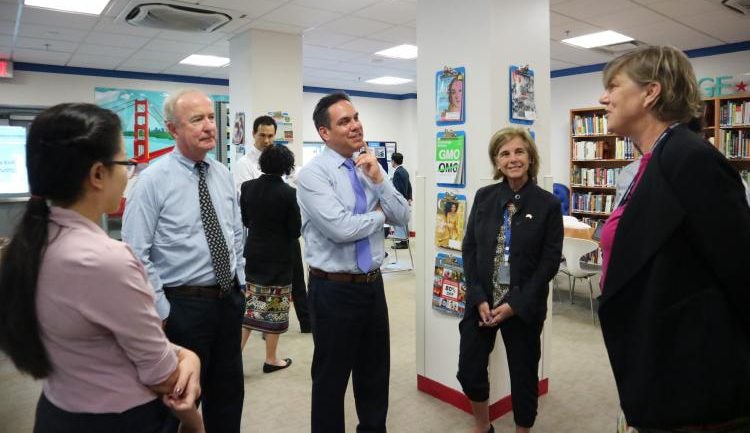 Two members of the U.S. House of Representatives recently touched down in Laos’ capital city of Vientiane, and English Language Fellow Briana Rogers was there to meet them. Congressman Rodney Frelinghuysen of New Jersey, Chairman of  the House Appropriations Committee, and Congressman Pete Aguilar of California, also of the Committee, visited the American Center in Vientiane on February 22 to learn more about the programs being offered there. They were accompanied by Ambassador Rena Bitter.
It was a chance for a talented Fellow to explain her work and her students’ accomplishments. The Congressmen learned about the English-language and American-culture programs that were designed and implemented by Rogers over the past four months. The guests were really interested to hear about the social impact the American Center is making and were also eager to talk to the Center’s students. They spoke with students in the Center about their studies and activities and about why they had come to visit the American Center. They surveyed student work, and even got to talk to two Buddhist monks who regularly visit the Center.
Promoting the good work that the Embassy, English Language Programs, and the American Center are doing together is important. Congressman Aguilar concluded his visit saying, “We appreciate the great work you are doing.” The kind words are welcome, but Rogers and the Vientiane students were just as thankful to the Congressmen and the Ambassador for their visit and support.