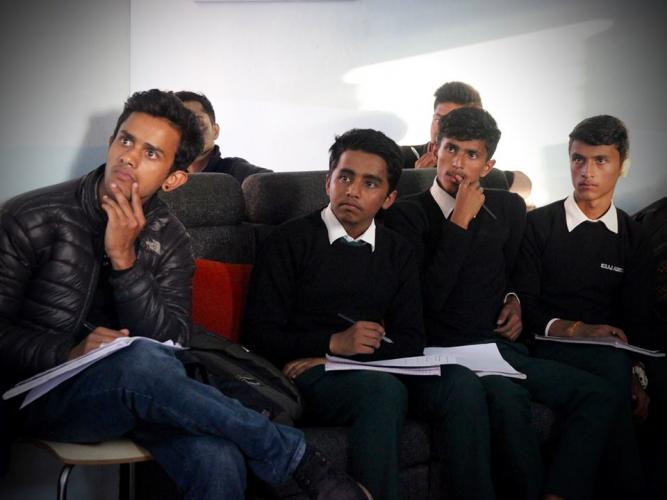 “I always underestimated a mobile phone and its capacity, but thanks to this class I understood that to tell a story you don’t need an expensive camera or gear, all you need is enthusiasm,” said English student (and new documentarian) Utsab Raj Giri. He was a member of the four-week crash course in filmmaking that English Language Fellow Matthew Nelson recently put on for English language learners in Pokhara, Nepal.
Budgets are tight and access to equipment difficult in Pokhara, but Nelson overcame that by focusing on the use of mobile apps to create short documentary films. Students began by learning about the history of documentary filmmaking and the prime characteristics of its differing styles. They were then introduced to the tools and techniques of filming with mobile devices and apps, including basic video-editing techniques. Finally, students began work on their own short English-language documentaries, starting with script writing and storyboarding before moving on to filming and editing.
In their fascinating projects, students tackled a wide range of topics and styles, producing everything from an emotional narrative film about the 2015 earthquake to an observational film about one of Pokhara’s oldest bakeries. They truly exercised and expanded their English-language skills through the narrations and interviews they included in their films, a great case of authentic English being taught in non-classroom contexts.
At the end of the four-week course, the Learning House hosted a public screening of the participants’ films. After the screening, audience members voted for their favorite films and prizes were handed out for first, second, and third place. The first place prize went to Utsab Raj Giri, a student at La Grandee International College in Pokhara for his film, “A Love for Dough.” Check out his project on YouTube!