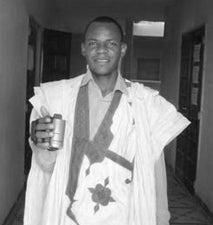 In May 2010, English Language Fellow Delia Dunlap posed a challenge to the first year students in her speaking class at the Teachers’ College of Nouakchott: Did they want to each research a topic and present a speech or did they want to do an interactive, collaborative video project, requiring much more effort and time, but ultimately producing a video they could each take home?

The students chose the video project.

It was a big undertaking, and the students were nervous. Each group would tackle a particular area, and together they would produce a complete newscast covering international events, local news, health, arts and culture, sports, and weather.

The students handled every aspect of the project, from selecting the news components as well as the feature stories, filming and acting on camera, editing, and even creating the rubric for evaluating the project.

They began by conducting research and drafting storyboards for each of the segments. Then the students went on location throughout Nouakchott to shoot video. They memorized pages of text and recorded multiple takes until they got each segment right.

Once filming wrapped, Dunlap went into the editing room with each group of students. They reviewed the takes, selected the best shots, and added music and transitions. It was tedious work, but the students had a lot of fun doing it together.

The video, once complete, was almost 40 minutes long. You can view each segment on YouTube: