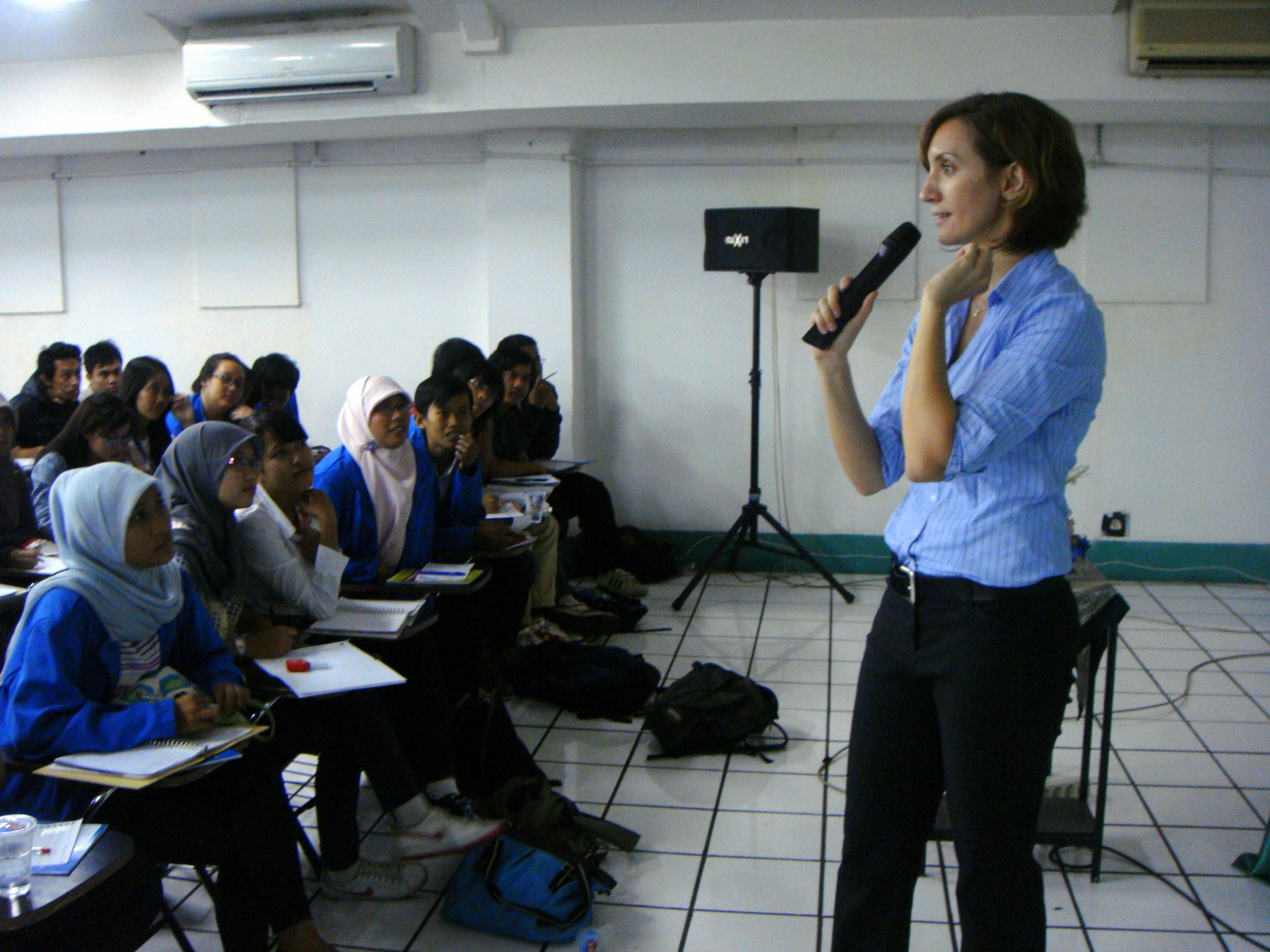 “Before becoming a fellow, I’d never been outside the United States,” recalls Jaclyn Gishbaugher.

Teaching writing classes for an intensive English program in Akron, Ohio, Gishbaugher was the only instructor who hadn’t taught abroad. “I was surrounded by people who had great teaching experience abroad, and I really wanted to do it,” she explains, “but most positions aren’t paid. Finding a job teaching abroad can be tough.”

She found the English Language Programs through Dave’s ESL Café and applied. With a master’s degree in education from the University of Akron and several years of experience teaching, including ESP teaching, she was matched to a project in Jakarta, Indonesia, teaching English in the National Police Language Center.

“I didn’t want to work with police officers at first,” says Gishbaugher. “I thought it would be bad for my resume, and I thought it would pigeonhole me.” But she accepted the position and moved to Jakarta in the fall of 2010.

“The transition from Akron to Jakarta was a little bumpy,” Gishbaugher laughs. But she loved the work. She taught mostly young officers just out of the academy. Many of them were training for assignments overseas or that would put them in contact with tourists. They were mostly male, and though there were some expectations around gender roles Gishbaugher had to contend with, the biggest challenge was overcoming the internal politics of her classes.

“The junior officers would defer to the senior officers, even if they were wrong,” she recalls. “I had to find a way to help my students navigate their own rank relationships just to get them to participate in class.”

Her project was a big success, and the U.S. Embassy decided to renew it for two more years, a highly unusual move. During her tenure, she worked with other fellows to launch an annual workshop in the style of a murder mystery as a way to teach police terminology to students.

After three years in Jakarta, Gishbaugher was finally ready to come back to the United States.

“I had planned to take a few months off, relax, and take it easy. But as soon as I got home, I decided ‘I need to find a job!’” Gishbaugher recounts.

She started cold-calling intensive English programs, with immediate results. “The fellowship in Jakarta was a huge draw for schools. I couldn’t believe the cold-calling worked.” She took a job with Ohio State University’s intensive English language program, and at first it was hard not to feel like she’d come full circle. “It seemed like I was right back where I started,” she says.

But only a few months into her new job, OSU pulled her from her regular classes and made her the program director for a new ESP program with Honda, teaching English to Japanese employees working with American counterparts in the United States. Her program launched with 400 students and is expected to expand to 900 in the next year or so.

And just recently, OSU sent her on a special project back to Indonesia. Using her teaching expertise and experience living in Jakarta, Gishbaugher traveled around the country to set up intensive English language programs in six locations.

Shaking her head, she says, “Teaching ESP as an English Language Fellow really did transfer to an incredible job with an incredible salary bump.”

To learn more about Gishbaugher’s experience as an English Language Fellow in Jakarta, check out the blog she kept during her fellowship, A Gish Out of Water.