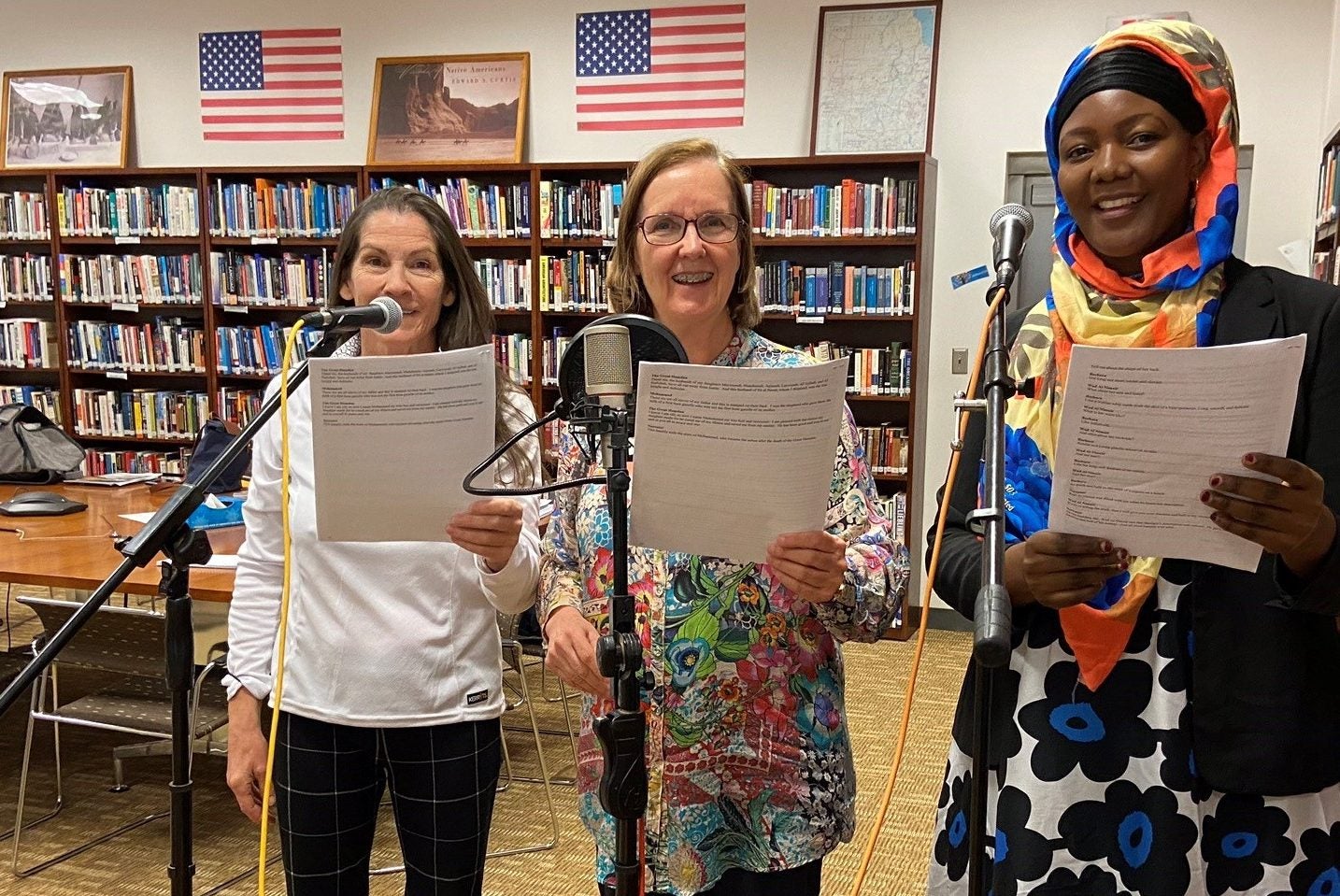 A Dream Partnership for a Unique Radio Project

In February 2020, while on assignment in Khartoum, Sudan, English Language Specialist Janet Raskin (featured in the center of the photograph above) adapted twenty folk stories for radio broadcast, coordinated recording sessions with volunteer readers, and set up guidelines for a digital handbook of follow-up language activities, all in just four weeks.

Raskin used her creative writing skills to adapt twenty stories from the popular book Folk Stories from the Northern Sudan, by author Abdulla El-Tayib. These stories were selected because the plots are known and loved by all. Raskin’s main goals were to make the folk stories work so that both language learners and radio listeners would be captivated and could follow along with no text to read. To bring each story to life, she used a variety of strategies. “As a textbook editor, I spend a lot of my professional life triple checking that material is appropriate for different language levels.” To begin, she added narration, dialogues, and sound effects. She purposefully included repetitions and adapted the language, sometimes balancing the tone of the folk stories to make them more modern without losing their ancient folk story feel. The support of the Capital Radio staff was instrumental in staying true to the context and using the best words to convey feelings. For example, she initially found the repetitive use of the word “ghoul” to refer to villainous characters in the original translation strange. “Was this a monster, a ghost, a spirit, or something else? [The Capital Radio staff] quickly informed me that “ghoul” is Arabic and thus the best word to use – everyone knows that a ghoul is a human-looking monster who eats people,” she recalled.

Once the 132 pages of scripts were completed, Raskin was ready to coordinate the recording of thirteen episodes at the Capital Radio studios and the library of the U.S. Embassy for a total of 4.5 hours of air time. Because she needed as many voices as possible for the recordings, she enlisted volunteer readers among the U.S. Embassy staff, Capital Radio employees, Marines posted at the Embassy, an English Language Fellow, and other Americans in Khartoum. Raskin provided voice modulation, voice projection, and additional technical guidance to the cast. None of them were professional recording artists, but all were eager to participate, taking time out of their busy schedules. While Capital Radio was actively editing, Raskin created a digital manuscript and set up guidelines for the digital follow-up activities that listeners can use on their mobile devices.

What Raskin enjoyed most about the project was the immersive feeling it gave her. The more she learned about the folk culture, history, geography, and food of northern Sudan through the folk stories she was adapting, the more she noticed and marveled at the desert, the ancient pyramids, the Nile with its fauna and flora, and the customs she experienced during her week-end travels. “It was as if the stories came to life as I was adapting them.  At times, it felt like I wasn’t just adapting the stories, I was living them,” she shared. In one of the stories, she had read about tall chairs set out in the field where children sat to guard the crops from birds. And the very next day, she saw those tall chairs in the field from the window of a tour vehicle as she was zipping through the desert! Raskin was also thrilled to witness the optimism and hopes for the future of young Sudanese she met at an outdoor music festival and a Khartoum-based business organization formed by Sudanese professionals to support each other and promote business after they returned from their studies in the United States. “Many young people were enjoying the music – something that seems commonplace in the United States – but the freedom to do this has come about in the last year.” Raskin returned from Sudan with a deepened understanding of the country and its history gained through her creative journey.

Janet Raskin is currently a Commissioning Editor with Macmillan Education in Miami, Florida, and adjunct faculty at Miami Dade College in the Theater Department. She develops print, audio, and video materials for young adult learning, primarily for the Latin American market. Raskin was an English Language Fellow in Shenyang, China (2011-2012), where she taught EFL methodology, public speaking, drama, and culture to graduate students at Shenyang Normal University. She wrote a CD ROM adventure game for English language learning, Escape from Plant Arizona, while working in Stockholm, Sweden, in the 1990s. Raskin holds an MA in TESOL and an MFA in Theater Performance from the University of Central Florida.