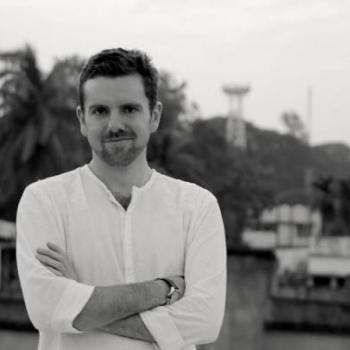 It’s not always possible to know unwritten local customs. English Language Fellow John Simpson (Ivory Coast/Cote d’Ivoire, 2014-2015) wants to pass on some advice for future English Language Fellows and travelers to West Africa: Gift-giving is king. When he arrived, the university generously provided him with a computer, phone, and flash drive. He considered returning the goods so students could buy some books, but a friend said the Ivorians would feel insulted. His friend suggested that he use those items to better the English language programming at the university. “It was such a light bulb for me,” John said, “because it gave me a window into local culture and values.” He often cheered on Côte d’Ivoire’s soccer team in the orange jersey he’d been given. The team had won the Africa Cup that year.

“Students were rolling dice and sharing their thoughts and feelings,” he said. “They ate it up. They were excited and weren’t afraid of making mistakes.” Students customized the game with local names, places, and people, a great opportunity for cultural exchange. It changed their attitude toward English Language education. Moving that needle is what the fellowship is all about.”

Upon arrival, Simpson was told to avoid all street food and to frequent only good restaurants, though he rolled the dice once and ended up with an awful malaise. Outside Abidjan, he contracted a mild form of Malaria and rested a week to recover. Despite these discomforts, the warmth and connection Simpson felt with the Ivorians far outweighed any inconvenience. Summing up his experience, he said: “I love Côte d’Ivoire!”