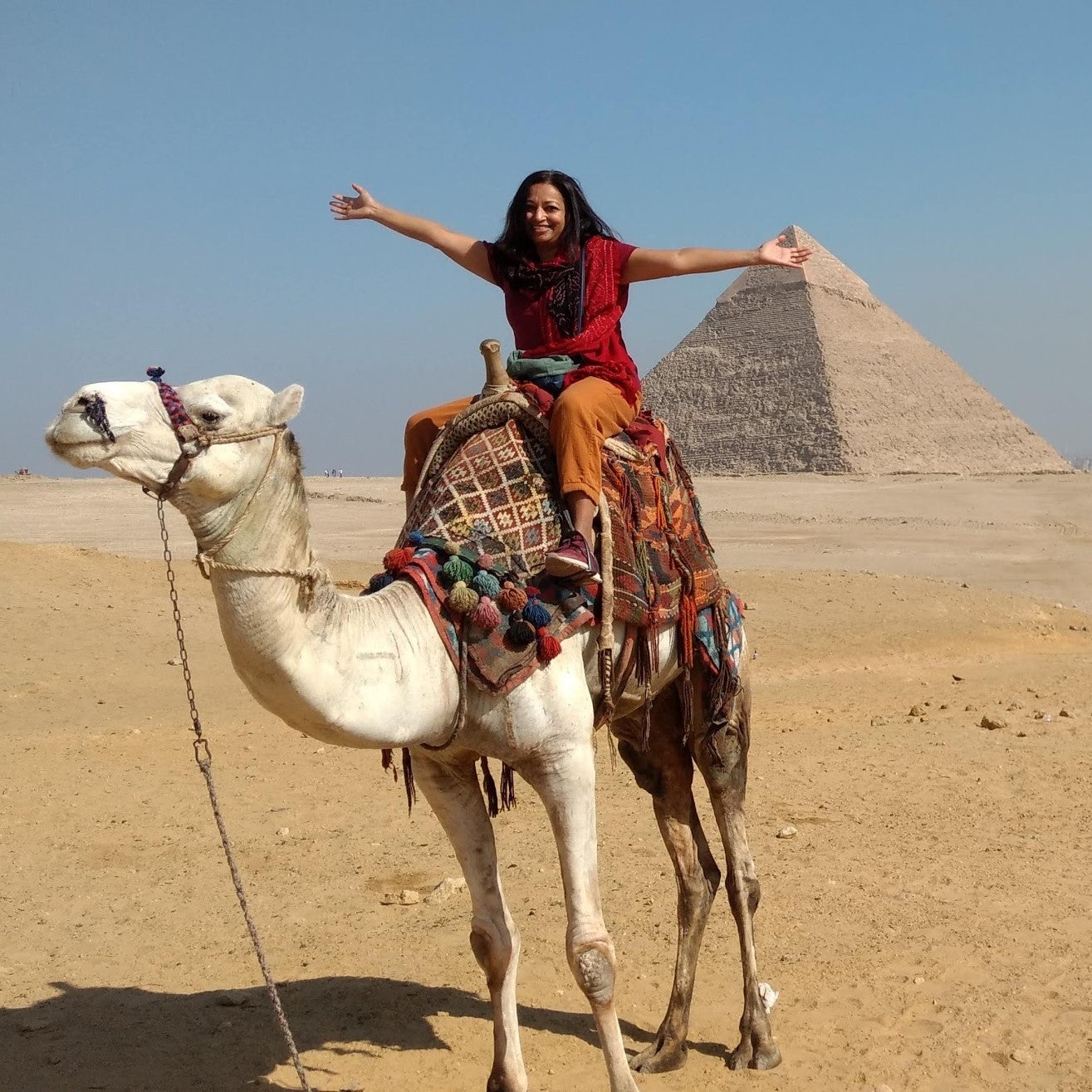 Natasha Agrawal was an English Language Fellow (2019 – 2020) in Cairo, Egypt. Her host institution, Al-Azhar University is one of the oldest Islamic universities in the world. The U.S. Embassy in Egypt partners with Al-Azhar to run the English Language Resource Center (ELRC) where all Al-Azhar faculty can take English lessons. Agrawal had two jobs there—teacher and teacher trainer. As a teacher, she taught Level 3 and Level 4 English to professors. They were eager to learn and improve their English language skills, as many were aiming for scholarships abroad. They were also interested in learning about all aspects of American culture, which Agrawal incorporated into all her lessons. As a teacher trainer, Agrawal provided weekly training to the English teaching staff at ELRC. It was their first semester moving away from textbooks to teaching with project and skill-based modules. Agrawal provided expertise to support this transition. As part of her secondary duties, Agrawal helped host events at the American Center in Cairo.  The American Center is attached to the American Embassy, and Egyptians go there to improve their English, as well as learn about education and culture in the U.S. Agrawal had the opportunity to moderate movie discussions, celebrate Halloween and winter parties, and run conversation clubs. Additionally, she was active with NileTESOL, providing professional development workshops on a variety of topics such as jigsaw classrooms, academic writing, and reading comprehension. In January 2020, she gave the plenary address at the NileTESOL Annual Conference on Experiential Learning to approximately 3,000 educators.

Last but not least, Agrawal worked with a group of English Access Microscholarship Program students, guiding them in theater activities, playwriting, and acting. Cairo, “the city of a thousand minarets,” was an endless source of fascination to Agrawal. She visited the pyramids several times, marveling at the mathematical precision of each boulder, imagining the ancient Pharaonic kingdoms. At the end of the fall semester, the teaching staff at ELRC showed Agrawal around the historic Mohamed Aly Mosque and its environs. Alongside two English teachers, Agrawal walked around the beautiful mosque and later sat down to enjoy the amazing view of the city, the river, and the pyramids. “The more we sat and connected, the deeper our conversation turned… For me, that’s what the fellowship is about: having the time to talk, share and listen, and developing understanding, irrespective of race or religion.” Natasha Agrawal began teaching English as a Second Language (ESL) informally to children in her neighborhood in New Delhi as an undergraduate student. She holds a BA in English literature from the University of Delhi and an M.Ed with a specialization in teaching English as a Second Language from The College of New Jersey. She has taught ESL in Trenton Public Schools since 2008 and has been a supervisor for numerous student interns. As an adjunct instructor at The College of New Jersey since 2017, she has been training pre-service and in-service teachers to work with immigrant and refugee populations. She is interested in social and emotional learning, especially when working with immigrant and refugee children who have often witnessed war, political unrest, or natural calamities. Her pedagogical interests include teaching language through theater techniques to share personal stories.