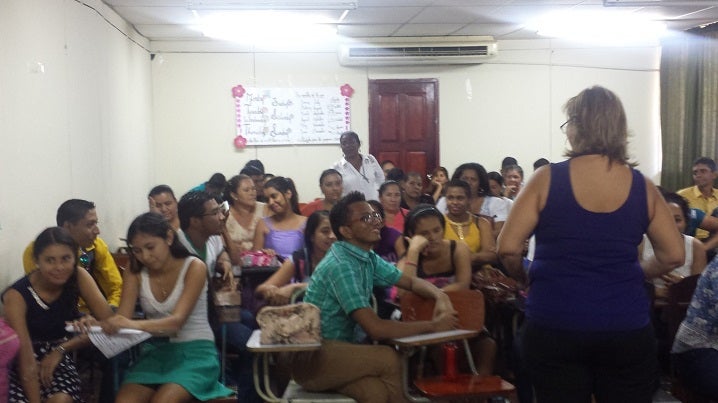 English Language Fellow Hope Hardin helped plan and implement the first College Horizons Outreach Program (CHOP) Parent Day at her school in Nicaragua, UNAN-León. The day was designed to show parents what their children have been learning in the program, as well as provide a survey regarding future parent involvement in CHOP.

Professor Omar Balladares presented on what a typical day at CHOP is like, followed by a creative dramatic production written and performed by CHOP students and mentors. The play was futuristic and depicted CHOP students acting out the preparation for the closing ceremony of the CHOP program set for 2017. It included impersonations of Balladares, Hardin, Director of Centro de Idiomas Edipcia Chavez, and Embassy Cultural Affairs Officer Andrew Veveiros. Students also performed a song they learned in English. Cultura UNAN-León gave a presentation for the audience of La Danza del Sol, Ritual en Honor al Dios Cipetotec de la Tribu Sutiaba (the dance of the Sun, a ritual in honor of the God Cipetotec of the tribe Sutiaba).

At the end of the day, parents were surveyed to assess their interest in the possibility of future workshops and connecting with other parents of CHOP students. The day ended with a brief sharing session led by Chavez, where students, mentors, parents, and coordinators had the opportunity to express perceptions, memories, and ideas for the future of the CHOP Program.