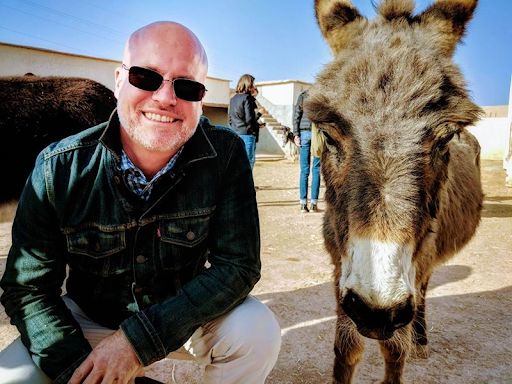 Based in Ramallah, West Bank, English Language Fellow Bret Vlazny is a cultural ambassador and visiting lecturer at Al-Quds Open University. Vlazny’s placement has taken him throughout the region visiting university branches from Jenin to Hebron. Discover Vlazny’s life as a Fellow as he introduces strategies for integrating classroom technology, delivers blended learning training for university faculty members, and supports the onboarding and training of new teachers.

Bret Vlazny is an English Language Fellow who lives on the crest of the Judaean Hills in the town of Ramallah. Daily life is full of activity, fresh food, and excitement, such as the ever-present sound of taxis chatting via extra loud horns, corner falafel shops with long lines as soon as a new batch is frying in oil, and the talk of the latest news.

Ahlaan wasahlaan, which generally means “welcome,” is a phrase Vlazny hears almost every day as he walks through the streets of Ramallah. In Arab culture, especially in the Levant region, foreign visitors are treated with great respect.  “From the moment I arrived, I have been greeted by everyone from the local butcher to the President of the University with Ahlann wasahlaan. Never once have I felt unwelcome. This is something I will never forget,” he explains.

Vlazny posts weekly on social media about the beautiful people and unique life that he has come to love in the region, with his stories reaching friends, colleagues, and acquaintances throughout the world. “I make a great effort to show that what one sees on the news is not the everyday life I experience,” he shares. “Although the conflict does affect almost every part of life here, it does not stop the people from being one of the kindest hearted and generous cultures I have ever known,” he reflects.

Vlazny’s primary project duties involve creating and delivering workshops in the English Language Department of Al-Quds Open University for both students and faculty members. The content of the workshops vary depending on requests from multiple branches of the university in cities throughout the region. Frequent topics include strategies for integrating classroom technology, blended learning training for faculty, and needs-based trainings to support newly hired teachers. Vlazny is always developing new materials and now has a personal library of presentations that he has curated during his fellowship.

For his secondary duties, Vlazny works with the Media Department at his host institution and assists future journalists in learning the importance of exploring international media outlets in English. “I believe this is an essential skill to enable young influencers to bring a balanced approach to reporting on world politics and international affairs in general,” he states.

The Power of Cultural Exchange

Vlazny describes that one of the most interesting aspects of his fellowship is the opportunity to meet relatable and influential people. He recounts that West Bank is a geographically small area with few foreigners who are permitted residence for an extended period of time. “Most visitors are adventurous tourists or perhaps an NGO intern, who are only allowed to stay up to three months according to visa laws. The fact I have been able to live here has brought a bounty of attention and many chances to be invited to unique events,” he shares.

When he first received his fellowship placement, Vlazny admits that he “didn’t know much about the history of the region or current events regarding the conflict.” He states, “I only had surface knowledge, which mostly consisted of random images of protests, soldiers, and UN relief agencies.” Vlazny first departed for his fellowship in the 2017-2018 English Language Fellow cycle, and he accepted the opportunity to renew his project for a second year. After living in the area for nearly two years, Vlazny feels that he has participated in an impactful cultural exchange. He shares, “As one of the Public Affairs officers described it, Fellows in the region are like mini diplomats who show the true goodwill of America and actually go places and meet people who official State Department employees cannot. I believe I made a difference here and that makes me proud to be part of the English Language Fellow program.”

After completing his fellowship in October 2019, Vlazny will head back to Palm Beach, Florida. He will spend the first few weeks with friends and family, enjoying the beach, and diving headfirst into full-time job hunting. Career-wise, his plan is to direct his job search towards technical training, instructional design, and software service adoption. This will be a natural transition given the plethora of experience he gained during his fellowship, helping a large institution train administration and staff on new educational hardware and software. Vlazny also looks forward to opportunities to present at international conferences via the professional connections made during his fellowship.

Bret Vlazny is currently an English Language Fellow based in Ramallah, West Bank. Vlazny earned his Master’s in TESOL from St. Michael’s College in Vermont and undergraduate degree from Penn State University. During the last two years as a visiting lecturer at Al-Quds Open University, he has had the opportunity to build teacher training courses, facilitate over 35 student workshops, and present in a 6-part English language video series which reached over 5,000 students. Vlazny also worked closely with the U.S. Embassy in Jerusalem (Palestinian Affairs Unit) to create content for the English language module of the Tech-Camp in East Jerusalem. Vlazny has traveled throughout the area visiting University branches from Jenin to Hebron. His responsibilities included introducing best practices in classroom technology, blended learning training for faculty, and advising administration in onboarding of new teachers. His passion for cross-cultural teaching comes from the many students and teachers he has worked with around the world. Throughout his career, Bret has lived and worked in Japan, China, Egypt, Saudi Arabia, Thailand, and Morocco. His future aspirations are focused on educational technology and instructional design.