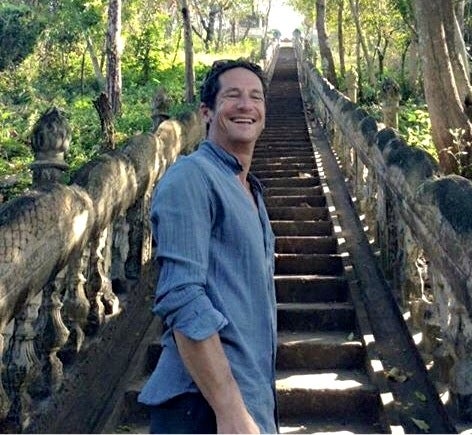 Richard Silberg was an English Language Fellow in Cambodia from 2015 to 2016. Today, he teaches at a public middle school in Berkeley, California. For Silberg, the fellowship was a year of professional development where he had the chance to dive into previously unexplored English language teaching territory. Richard returned to the U.S. energized and with a new view of himself as an educator.

The fellowship has had a lasting impact on Silberg on both a professional and personal level. “Immersing myself in the world of English language teaching for a 10-month period was amazing, he said. “It was like a self-guided PhD program in the field. Being immersed in a new culture, very unlike the U.S., was a joy as well, an opportunity I had longed for, yet never had,” Silberg explained. Silberg’s primary project in Cambodia was working as a teacher trainer for pre-service Cambodian public middle school teachers and he ended up developing many of his own secondary projects through connections he made with the Cambodian TESOL community. Silberg sought out TESOL stakeholders in the area and got involved in teacher training and teaching English through drama. He trained Peace Corps Volunteers during their inservice training and visited many of them at schools in rural areas of the country to conduct one-on-one trainings. Silberg was also involved in teacher training at Epic Arts, a theater and arts school for Cambodians with disabilities where he worked with teachers on using drama to teach English. Silberg started this project after attending a performance and loving it. He reached out to the director, explained his background in both ESL and drama, and was invited to join the team.

Silberg recalled yet another secondary project with fond memories that sounded like the beginning of a joke. “A monk walks into a bar, where I happen to be, and comes up to me and says, ‘I hear you’re an English language teacher.’” From that day on, Richard was involved in teacher training at a Buddhist after-school English language program for low-income children. This fellowship for Silberg and his family was “a big deal” he explained. His wife traveled with him to Cambodia and became the yoga teacher in town, starting up a weekly yoga class that Silberg’s students would often attend. It was ‘very different than, you know, a Berkley yoga class for sure,” Silberg explained. “My wife became sort of the extra mom for a lot of the young teachers I worked with.” Most the the teachers Silberg worked with were around 19 and 20 years old and he said that “they would sometimes come over to our house when I wasn’t there to just hang out with my wife and that was pretty special … that meant a lot.” The year was powerful for both Silberg’s wife who lived with him in Cambodia and his daughter who visited in the spring of the fellowship. Silberg’s daughter, a professional artist based in California, spent part of her visit painting a mural in Kampong Cham. A community member allowed her to use a wall on the side of a restaurant and she began painting. Silberg recalled the process. “It’s 97-degree-Fahrenheit heat and she’s painting these murals- this big mural- of a Cambodian woman fruit seller that she had met.” The work of art is the only mural in town and remains a marker of lasting impact. The fellowship changed Silberg as well. “My home community, my teaching here, there was a big change when I came back,” he explained. Prior to the fellowship, Silberg had been teaching at the same middle school for around 26 years. He took a sabbatical to teach in Cambodia and came back to the school rejuvenated and with a new perspective on teaching and of himself as an educator. “I viewed it as a year of professional development,” Silberg explained. He took the time to integrate new resources like American English and English Teaching Forum into his teaching and training. Silberg reported, “It’s just changed how I view myself as an educator in many ways. … Cambodia cracked me open. You can’t live in the provinces of a country like this without changing.” The English Language Fellow Program in Cambodia was the impetus for a fresh take on English language teaching for Silberg and a meaningful exchange for him and his family. Silberg continues to share lessons from Cambodia and TESOL expertise with English Language Teachers on the COP and worldwide. You can follow him on social media and explore his website devoted to English language teaching and drama to learn more about his impact in the field.