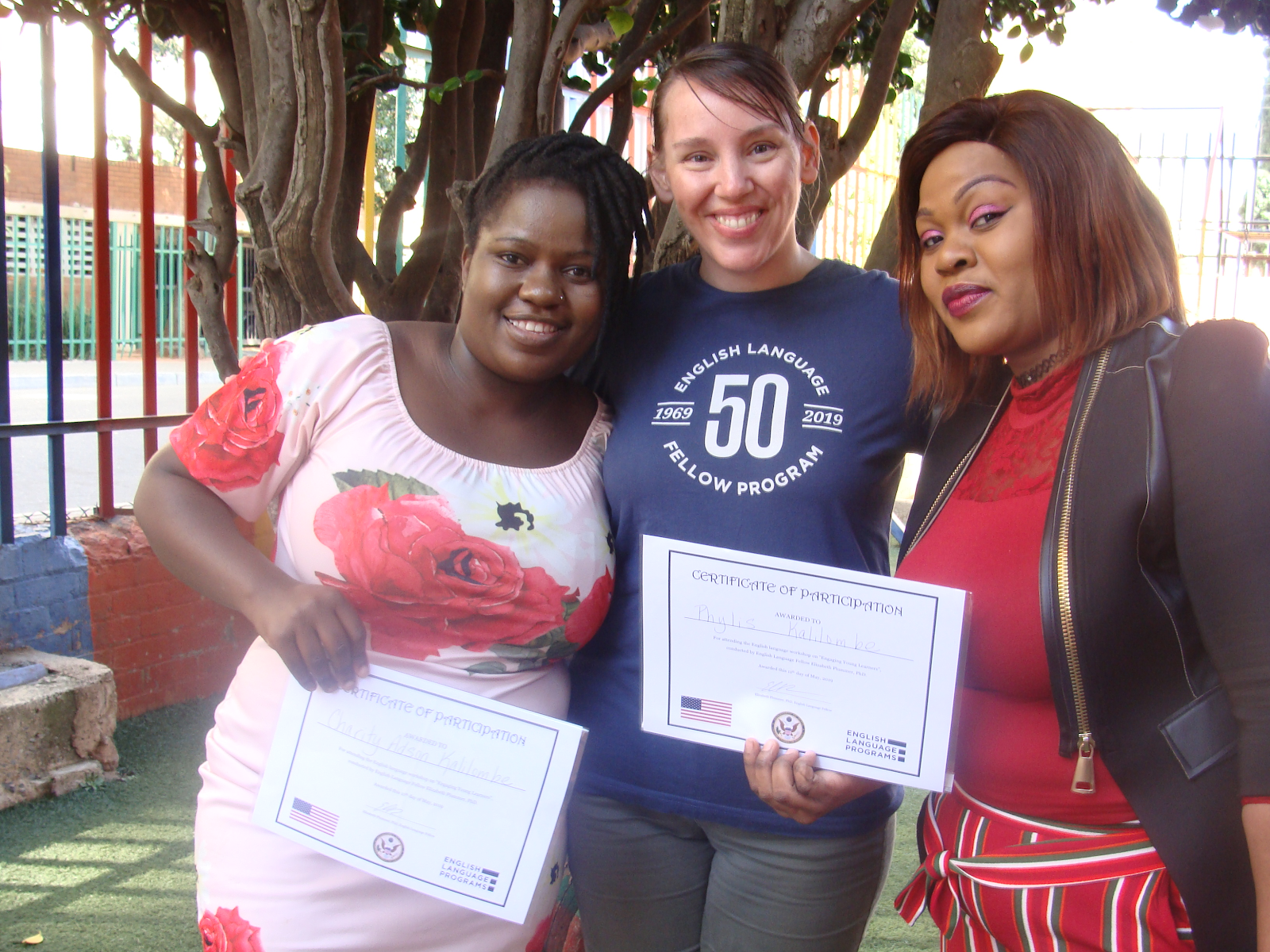 Based in the city of Johannesburg, South Africa, English Language Fellow Elizabeth Plummer supports teacher professional development in technology at University of Witwatersrand’s Hub for Multilingual Languages and Literacies (HuMEL). Discover Plummer’s life as a Fellow as she manages a language laboratory, leads professional programs for local teachers, and mentors student researchers conducting projects in schools across South Africa.

Although Johannesburg is South Africa’s largest city, Plummer and her teenage daughter live in a quiet neighborhood that looks down on a forest of trees. Plummer begins her day with three important routines: catching up on local and international news, making a list of daily tasks, and driving her daughter to school. Thereafter, Plummer begins her workday, which can vary drastically based upon specific projects and workshops. On most days she walks to the education campus at the University of Witwatersrand (Wits) to lead professional development sessions, attend meetings, and connect with colleagues. In other instances, she may spend the day working from home preparing materials. Plummer also frequently travels to different schools and sites around Johannesburg and the surrounding area to conduct professional development or to lead programs in schools, American spaces, English Access Microscholarship programs, or the United States Consulate. No two days are exactly the same!

In her downtime, Plummer and her daughter enjoy attending local plays, comedy shows, and concerts; they are also trying to visit all the many museums in the city. Traveling to nature preserves, gardens, picnicking, hiking, and enjoying the abundance of wildlife are also among their favorite activities.

On the long weekends, Plummer and her daughter like to get out of the city and go to the game reserves. “It doesn’t take too long before you find yourself in the African bush,” Plummer states. She explains that it is quite easy to not only travel around South Africa but across southern Africa. “There are so many places to visit that are just a short drive or plane ride away. My daughter and I travel quite a bit around South Africa and the surrounding countries,” she says. Dr. Plummer and her daughter are especially fond of getting away to the islands that are just off the coast.

Plummer’s host institution, the Hub for Multilingual Languages and Literacies (HuMEL) at Wits University, is striving to be at the forefront of providing teacher professional development in educational technology and literacy. Thus, much of Plummer’s time is spent focusing upon this goal. Her primary project responsibilities include managing the language laboratory; conducting professional development programs for local teachers; working with faculty, staff, and graduate students within HuMEL on best practices of incorporating educational technology into their teaching and research; and providing support for the many research projects that HuMEL is conducting in schools across Gauteng, Limpopo, and Mpumalanga provinces.

Plummer also enjoys participating in a variety of secondary projects, which include conducting professional development sessions for teachers, working with Access students and teachers, facilitating MOOC camps, sharing culture through crafts, and presenting at local and international conferences on language learning.

“One thing I am really passionate about is engaging individuals in life-long learning,” Plummer states. By opening the first Little Free Library at Wits, she’s brought her passion into reality. “I hope to be able to use this to showcase the importance of creating a community of readers on campus and beyond by reducing barriers and engaging in the simple act of reading,” she shares. Since the mission of her host institution is to support current and future teachers,  Plummer is excited to share the joy of reading with her community and to help develop reading role models.

“Much of what I have learned about daily life in South Africa comes from connecting with other parents, alumni, and students at my daughter’s school,” Plummer states. “It’s one of the benefits of bringing a dependent child with you when you travel.” Plummer describes “an instant connection” with other parents who helped her find a sense of community and connection in South Africa. “One of the things that surprised me was that in the microcosm of a little coffee shop at a school in South Africa, I have had some of the most intriguing and diverse discussions among individuals of varying backgrounds,” she describes. “We talk about the typical challenges with parenting…mixed in with discussions of politics, religion, and other conversations on a scale I never have been a part of before other than with colleagues in academia.” Living and attending school in South Africa has also widened her daughter’s perspectives of the world and fostered meaningful mother-daughter conversations about culture and identity.

Plummer is a big fan of free American English resources. “When I conduct programs, I try to use the materials found on American English as much as possible. The availability of free resources on this website are amazing,” she describes. Much of Plummer’s work has focused on helping teachers understand how they can access and use the free American English resources in their classrooms. By demonstrating how to use the music, games, and teaching resources freely available on the American English website, Plummer is striving to create ongoing professional development routines that will continue after her project ends. “Since new materials are added all of the time, this opens the door for them to continue their professional development journey long after I am gone,” she reflects.

Plummer has renewed her fellowship in South Africa for the 2019-2020 year. Looking forward, she hopes to further develop partnerships within the local community, lead more teacher training workshops, and travel to new places that she hasn’t yet had time to explore. She may also need to get more pages for her passport! Elizabeth Plummer obtained her doctoral degree from The University of Iowa College of Education in the Department of Teaching and Learning with a focus on Foreign Language and ESL Education where she was a recipient of the Maureen Medberry Snell Education Award. Plummer is a specialist in online language education, Computer Assisted Language Learning, educational technology, teacher development and English language education. She has been teaching language for more than 15 years from primary to adult education where she loves to engage students of all ages in the language of crafting. She has been providing teacher professional development for six years in the U.S. and Mexico with a focus on educational technology for language learning. Dr. Plummer is also an alumna of the University of Idaho and Brigham Young University – Hawaii where she received a master’s degree in 2005 (Teaching English as a Second Language) and a bachelor’s degree in 2001 (Teaching English to Speakers of Other Languages (TESOL)).