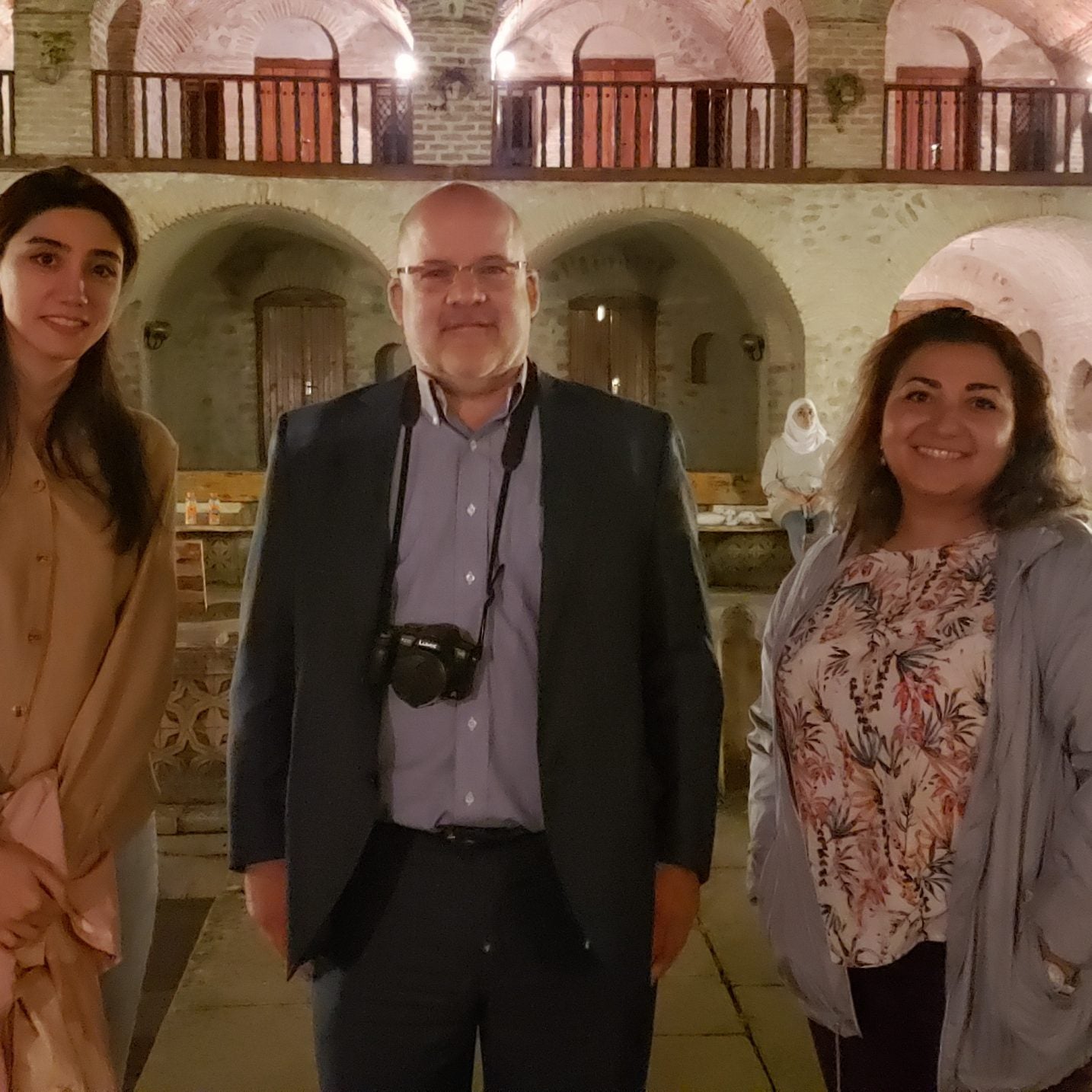 In September 2019, Stephen Sadlier returned to Azerbaijan for a two-week English Language Specialist project, fifteen years after being a Fellow in the same country. During his Specialist project, he connected with his colleagues on a level he had not anticipated possible in such a short period of time. His project involved supporting ministerial officers at the Azerbaijan State Examination Center (SEC) who were preparing to present at the International Association for Educational Assessment (IAEA), and also training mid-career teachers at the Baku American Center (BAC) during its annual English week.

Becoming part of the team

Sadlier was overjoyed to once again experience the incredible hospitality of Azerbaijanis, this time courtesy of his welcoming hosts at SEC and BAC. He felt he truly connected with his colleagues as a full member of the team. Despite an intense schedule, his hosts went out of their way “to interact with me as a person,” he says. During his first week, the SEC lead invited Sadlier for tea and sweets in his office. “The sharing of tea plays a significant role in equaling social relations between individuals in Azerbaijan,” he explained. This initial shared ritual sparked numerous follow-up food conversations and sampling experiences, including a team barbecue out of town.

During his second week, the BAC organizers made sure to take him to Azeri, Russian, and Turkish restaurants to ensure a wide culinary experience. On the final day, Sadlier asked if he could treat his hosts for lunch, half expecting to be turned down. He remembered that as a Fellow in Azerbaijan in 2003, every attempt to treat his hosts at social gatherings was inevitably met by the phrase “you are our guest.” To his delight, because he was returning to Azerbaijan as a Specialist, his colleagues embraced him as a full member of the team. “Naturally, these two narratives are not about tea, sweets, and food per se; they are a proxy for finding a point of connection, a dynamic that made the seminars flow easier.”

The power of international conferences

The biggest lesson from this project was realizing the power that international conferences can hold for people. Sadlier explains that “Azerbaijan had never before hosted an international event like the IAEA annual meeting, which brought prestige and visibility to an agency which is tasked with the promotion of better governance and accountability.” As he prepared researchers and administrators in the SEC to present at the IAEA annual conference in Baku, he was able to appreciate how much people network and develop their skills at international conferences. It was a humbling task to support researchers and administrators who had pioneered teacher assessments in Azerbaijan as they were getting ready to step into an international sphere to present their field of expertise. “At the conference, the mid-level civil servants who are most fluent in English spoke for their senior directors and whole sectors. It was a real chance for rising stars to play a visible role in a world event. Without the international conference format, these agents for change would not have had this chance.”

Sadlier saw his Specialist project as an opportunity to “provide an example of lifelong learning and openness” in his own career as an educator and researcher. For example, for his language courses in Olympia, he redesigned his teaching in content-based instruction based on the constructive feedback he received from the mid-career BAC teachers during his seminars on the study techniques of spaced practice and interleaving.

On a personal level, Sadlier has enjoyed sharing stories about his experience in Azerbaijan with members of his mother’s retirement community and has jumped on other opportunities to share his love of intercultural exchange in his community.

Finally, because his research in the last decade has focused on teachers who work in post-conflict settings in the United States and Latin America, it was fascinating to “observe how landscapes of conflict can transform over time” in Azerbaijan. “The 2019 trip bore no signs of the same struggle that I observed so much during my first fellowship to Azerbaijan in 2003-2004 when hundreds of thousands of internally displaced persons lived around me in the city of Baku,” he reflects. Working with Azeri teachers striving to provide quality education in the face of difficult circumstances gave Sadlier a new insight into common questions that teachers in complex contexts have, such as providing opportunities for authentic language use, preserving cultural heritage, or promoting effective uses of L1 in the classroom to facilitate English language study.

Stephen Sadlier has taught English and Spanish for over two decades. In 2019, he returned to Azerbaijan, where he was an English Language Fellow in 2003-2004, as a Fellow 50th Anniversary Go Back Give Back contest winner. He was also a Core U.S. Fulbright Scholar in TESOL/AppliedLinguistics in Chile, 2013-2014. His research on sociocultural foundations to language has appeared in Journal of Latinos and Education, International Journal of Qualitative Studies in Education, and European Journal of Foreign Language Teaching.  With a doctorate in Language, Literacy and Culture from University of Massachusetts, Amherst, and a Master’s of Teaching in Spanish and ESOL from the School for International Training Graduate Institute, he lives and works in Olympia, Washington.